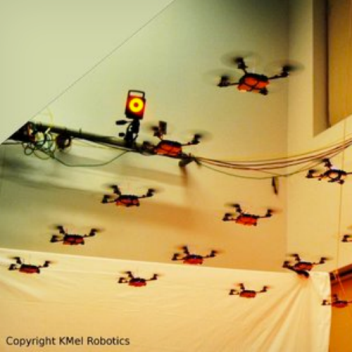 The University of Pennsylvania has collaborated with KMel Robotics in creating an array of nano quadrocopters ready to prey on your deepest-seated automatonophobia. Looking and sounding as menacing as a wasp's nest, the swarm of tiny quadrotors can move in groups, avoid obstacles, and change formations in 3D space. Each of the nano 'copters is self-sensing, allowing it to accurately position itself and maintain its balance through even the most complex of movements.

This is the latest in a line of quadrocopter videos from the team at GRASP — Penn's General Robotics, Automation, Sensing & Perception laboratory — with each new clip showcasing the hovering robots becoming increasingly agile and advanced. There aren't too many technical details given about the quadrocopters, so it's not clear just how much prior programming each maneuver takes, or how they communicate. And while Parrot's AR.Drone might be able to dance, can it do anything quite like this?