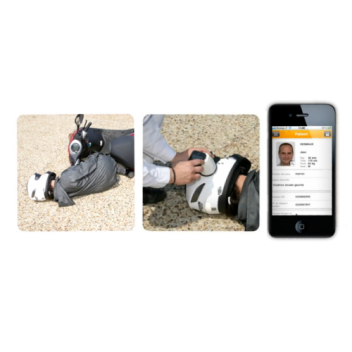 Japanese-based Asahi Kasei has previously used RFID technology in portable charms to alert medical personnel to important patient information when dealing with emergencies. Now, using stickers featuring QR codes, Code d’Urgence in France is also on a mission to improve data delivery to those responding to accidents and emergencies.

Those registering for the service must first fill out a medical questionnaire from the company, which must be validated by a doctor. Users pay for an annual subscription, costing EUR 36, and this information is then stored on a secure server approved by the Ministére de la Santé for one year. The company then sends out ten stickers featuring a unique QR code to the user, suitable for placing onto motorcycle helmets, bike frames, behind watch faces or on the back of cell phones — the company provides a list of recommended sticker locations upon subscription. The code can be read quickly by medical professionals equipped with the secure Code d’Urgence smartphone app, enabling them to respond in the best way possible. According to the developers, Code d’Urgence is the only system of its kind to have been made in collaboration with the country’s SAMU (Service d’Aide Médicale Urgente) and SMUR (Service Mobile d’Urgence et Reanimation) doctors. It is also compliant with the Commission Nationale Informatique et Liberté, which means all the medical data is secure and only accessible to medical professionals. The video below contains more details:

The stickers are small, but noticeable, and are by their nature 2-D rather than 3-D, allowing them to be applied almost anywhere. What’s more, by using QR codes rather than RFID, the information can be accessed via a smartphone, avoiding the need for a dedicated reader. Backed with recognition from national health officials, this could prove to be an idea that saves lives. One to replicate or partner with?