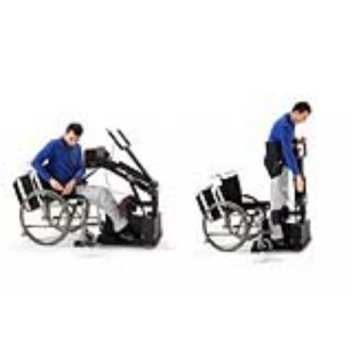 Seeing this device help a man get up out of his wheelchair makes us wonder why this hasn’t been around for ages. The design principles behind the Tek RMD greatly benefit those without use of their legs. But it’s not just to help him stand, it also serves as motorized transport that makes bulky electric wheelchairs look so last century.

Instead of having the support structure beneath the rider, the RMD (Robotic Mobilization Device) uses a sling-like method to hang from the hinged arm. A folding handlebar can be raised up, allowing the rider to move from sitting to standing with a bit of help from the machine. Whether upright or sitting, the device can travel using its electric motors. In fact, this tip was sent in because it looks very much like riding a Segway.

The video demonstration after the break really hits home the functionality provided. This is an instant quality of life improvement, breaking down some of the barriers of moving around in confined quarters with a motorized wheelchair. There is also a lot to be said for having the option to stand. The demo shows several circumstances like shopping at the market, going through the checkout, and grilling out. What an amazing use of technology.