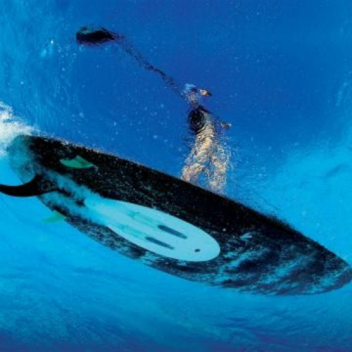 In order to surf those massive walls of salt water known as big waves, brave surfers usually need to get towed in by a personal watercraft (PWC). This presents some logistical problems (i.e. having to bring a buddy along to tow you around all day). The WaveJet gives you the power you need without requiring a large tow-in vehicle or separate person.

The WaveJet is a personal water propulsion (PWP) device that adds a little motor power to paddling. Unlike the JetBoard, which harnessed motor power in the ride itself, the WaveJet has the more modest objective of getting you to the ride. It lets you paddle up to four times faster, giving you the speed and power you need to catch a big wave without a buddy riding shotgun.

The WaveJet itself is a pod that's designed to fit quickly into WaveJet-ready boards of all kinds - surfboards, paddleboards, boogie boards and rescue boards. It fits flatly against the bottom of the board, so it doesn't interfere with your ride and uses two aluminum impellers to give you up to 20 lbs (9 kg) of thrust and 12 mph (19.3 km/h) of speed.

The surfer controls the output by way of a wireless remote control worn on the wrist. The wireless system keeps the surfer's hands free and doesn't tie him to the board. The wristband also monitors battery level and cuts propulsion off if the surfboard gets more than a leash length away from surfer. The rechargeable lithium-ion battery gives you 30 to 45 minutes of run time, and since you're not actively using it the entire time, that translates to much more actual time on the water.

WaveJet inventor Mike Railey enjoyed tow-in surfing when he first tried it back in the late 90s, but didn't like the hassle of having to rent out a tow-in vehicle. The existing motorized boards were too heavy for his liking, so he got to tinkering on the compact, lightweight add-on that became known as the WaveJet. After receiving several patents for the model, Railey introduced WaveJet last year. Surfers, professional lifeguards and other industry professionals have been testing it, and the first commercial run will hit the market next month. The WaveJet will be offered in surfboard, boogie board and stand-up paddle board varieties this year, with kayak and other models to follow next year.

Big wave surfer and WaveJet ambassador Garrett McNamara was using a traditional tow-in system when he set the world record for biggest wave (90 feet/ 27.4 m) ever surfed last November, but he did use the WaveJet to catch a 50-footer (15.24 m) on the same trip to Portugal.

While WaveJet was inspired by big waves, the system is also useful beyond surfing. When used in rescue boards, it allows lifeguards to get to victims more quickly while conserving energy. Serving as a lightweight motor on a kayak or boat, the WaveJet's flat design means it doesn't need any clearance and can be used in shallow water. It can also help boaters to battle strong currents. 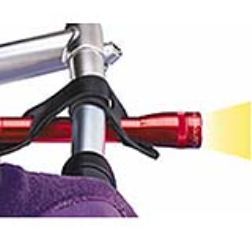 Use MagLite as a bike light