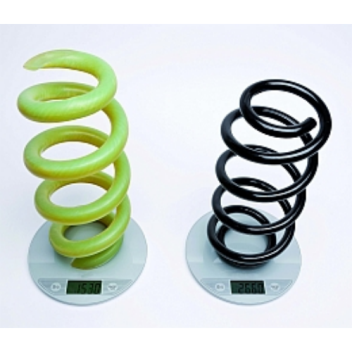 Carmaker Audi is about to roll out fibreglass-reinforced epoxy road springs which match the function of steel coils in coping with severe loading, but are around 40% lighter.

In common with other car manufacturers, Audi’s engineers work determinedly to avoid every scrap of unnecessary weight – not only in the body but also in every other component and assembly.

Ultra-lightweight design is a particular priority for the car’s chassis and suspension, since any reduction in unsprung mass improves ride comfort and handling. The fibre-reinforced plastic (FRP) coil spring has been developed jointly by Audi project engineer Joachim Schmitt and the patent holder Sogefi, an Italian designer and manufacturer of automotive components.

As compared with a conventional steel spring, the FRP spring’s “wire” is thicker, the spring’s overall diameter is greater and the number of turns is fewer. Above all, this type of spring is much lighter in weight. Schmitt reports: “Each of the steel springs in the Audi A4’s front suspension weighs 2.66kg. The FRP spring weighs only 1.53kg, more than 40% less, but it performs just as well. It’s also bright green in its ‘natural’ state!”

A helix made from FRP is capable of absorbing torsional loads extremely well if it is designed with this specific purpose in mind, according to Audi. The core of the spring consists of long glass fibres twisted together and impregnated with epoxy resin. A machine wraps additional fibres around the core, which is only a few millimetres in diameter, at alternating angles of plus and minus 45° to the longitudinal axis. The alternating layers support each other and act in either compression or tension. Torsional loads across the component are thus converted in the fibres into tensile and compressive loads.

Volume production roll-out will be on Audi R8 e-tron

The next production stage is for the “wire”, while it is still wet and soft, to be wound onto a metal alloy core with a low melting point. The FRP material is then hardened in an oven at more than 100°C, so that the core melts. This is the process currently used to manufacture the prototypes, but Audi expects it to become very much faster and more efficient in volume production.

The new FRP suspension springs will make their debut before the end of 2012 in the electrically propelled Audi R8 e-tron model. In 2013 they will be introduced step by step in greater volume for Audi midsize and large luxury models. Long-term road trials are taking place at the moment, accompanied by marathon test cycles on special rigs, each of which imposes loads on the spring equal to about 300,000km of driving by the average customer.

“In the early days many of my colleagues were not convinced that the project would be a success,” Schmitt recalls. “But from the very start FRP proved to be an excellent choice of material. It is absolutely immune to corrosion and effectively resistant to chemicals such as wheel cleaning products. Manufacturing FRP springs consumes less energy than for steel springs, and they reduce the weight of a car such as the current Audi A4 by about four kilograms – a notable step forward.”

The FRP springs are “tunable” to suit the chassis engineers’ requirements, taking the car’s axle loadings and characteristics in terms of ride comfort and handling into account. The tuning variables are the length of the “wire”, its diameter and the number of turns. In a few years’ time the Audi engineers expect better improved production methods to increase the load capacity of the FRP material, so that the space needed for the springs will be no larger than for today’s steel springs.

Even the unusual bright green colour is being addressed. Schmitt says: “If we add an appropriate dosing of graphite to the mixture for the FRP springs, they are dyed black right through. And for enthusiastic drivers we’re already working on red and blue springs!”