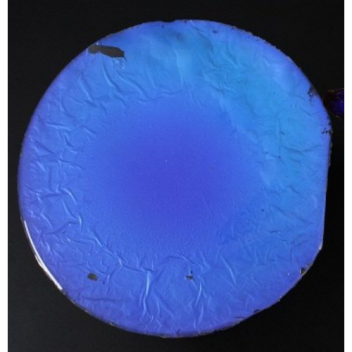 Butterfly wing material is somewhat like spider silk, in that they’re both animal-produced substances which scientists are very interested in copying. In the case of butterfly wings, it’s their ability to brilliantly reflect light in a variety of iridescent colors that could prove particularly useful to humans. Researchers from the Korea Advanced Institute of Science and Technology (KAIST) are reporting success in replicating the reflective properties of the insects’ wings, using tiny glass beads.

Prof. Shin Jung Hoon led the team, which set out to copy the wings of the morpho butterfly. According to the researchers, the secret to the morpho’s striking wings is that their reflective microstructure is at once ordered and chaotic. Analyzed at the 100-nanometer level, the structure is in disarray. Zoom out to the 1-micrometer level, however, and it becomes uniform.

The scientists replicated this arrangement by first randomly aligning glass beads of various sizes, although all of them measured approximately a few hundred nanometers across. That took care of the chaotic structure. Then, they used a semiconductor deposition process to deposit a thin film over top of the beads. This made the structure appear ordered when viewed as a whole. They sealed the resulting film in thin clear plastic, to protect it and give it more structure.

The finished product was said to produce a better quality and brightness of reflected light than the butterfly wings themselves. Additionally, the color of the film changes less than that of the wings, when viewed from different angles.

Down the road, the technology could find use in anti-counterfeit currency, ultra-bright mobile device displays, sensors, or even the fashion industry. KAIST isn’t the first institution to copy the reflective qualities of butterfly wings, however. A joint Pennsylvania State University/Universidad Autónoma de Madrid team has had success, as has a group from the University of Cambridge – although using different techniques.