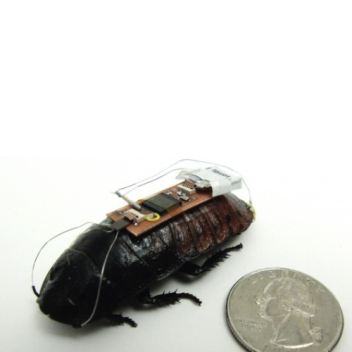 A team of scientists from North Carolina State University are working on an sensor-equipped cockroaches that are remotely controlled by human operators.The project is being led by Alper Bozkurt, an assistant professor of electrical engineering. His team has fitted Madagascar hissing cockroaches with “backpacks” containing an inexpensive, lightweight, commercially-available chip, along with a wireless receiver and transmitter, and a microcontroller.

That microcontroller is wired into the cockroach’s antennae and cerci. Located in the abdomen, the cerci are sensory organs that detect air movement in order to warn of possible approaching predators. When the cerci are instead stimulated by the microcontroller, the result is the same as it would normally be – the cockroach thinks that something is coming at it from behind, and scuttles forward.

In order to direct that forward movement, either one of the antennae are stimulated. Ordinarily, they’re activated when they brush against unyielding objects, letting the cockroach know that it can’t move in that direction. In this case, when the stimulation comes not from an object but from a small electrical charge, the insect still reacts by changing course.