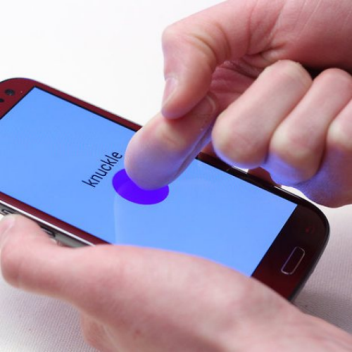 A touchscreen that can distinguish knuckle, stylus, nail, and finger taps

Chris Harrison invented software for touchscreen devices that can recognize different kinds of taps, like knuckles and fingernails. FingerSense is the inaugural product of Harrison’s startup, Qeexo, and he tells Co.Design that his team is in talks with Android handset manufacturers to integrate FingerSense into their phones. "see this as a system-wide functionality," he says.

The catch is that FingerSense requires an extra bit of hardware in order to work--an acoustic sensor that can recognize the unique vibration patterns that distinguish among fingertip, fingernail, and knuckle taps. Which means you can’t just download FingerSense from Google Play and magically give your Galaxy Nexus a next-generation user interface--yet. "We are looking to partner with device makers to integrate this sensor, which our software needs," Harrison explains. (In the meantime, developers can email Qeexo for an Android SDK to tinker around with.)