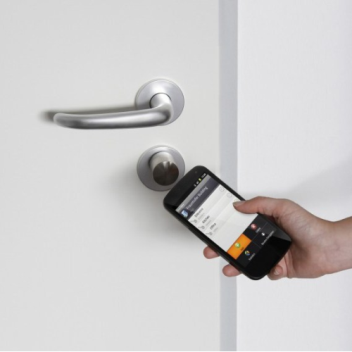 Mobile phones have already swallowed up the average Joe's diary, compact camera, watch and Walkman. They're working on replacing the wallet as well – so the next logical step is to go hunting for the last remaining pocket-dwelling device they can gobble up in their mad fury of convergence – your keyring. Smart and secure door access apps and hardware have already sprung up using Bluetooth and Wi-Fi – now there's ShareKey, which uses NFC (near field communication) and aims to be the most secure of all systems.

Sadeghi has developed a system called ShareKey, which is effectively an Android app that communicates with smart door locks via NFC to open and close them simply by waving the phone near the lock. Unlike similar systems from Lockitron and UniKey, which use Wi-Fi and Bluetooth to send instructions, you need to have the phone very physically close to the lock for ShareKey to operate, which makes it harder for hackers to intercept a signal.

The system makes it easy to assign or revoke access to each door in a flexible manner. Any smartphone user can be granted access to a door or group of doors for a defined period – so you can give your houseguests unrestricted access for a week, or give your temporary employees access in work hours.