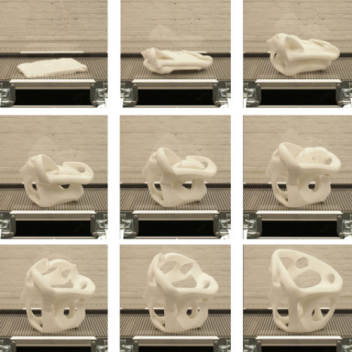 Bringing shape memory polymers to the next level

Belgian designer Carl de Smet of Noumenon has developed high-tech foam furniture that can be squashed to 5% of its original size for easy transportation and then expanded "like popcorn" by heating it up.

Under the proposal, which is still at the research stage, products made of polyurethane shape-memory polymers (SMPs) are compressed into flat, lightweight slabs , meaning they take up very little space until they are required. When heated, the furniture returns to its original shape thanks to the "memory foam" properties of the material.

"It's light, so for shipping it's almost taking up no space," de Smet told Dezeen. "If it gets damaged and it's heated again, the damage disappears. If you ship the packaging and something happens to it, it doesn't matter because it isn't the end product; that's in the imprinted memory."

The project evolved out of a research project to design a parabolic antenna for outer space that would be compressed to make a smaller payload on a spaceship, then expanded to full size when exposed to the sun's rays. This project involved shape-memory alloys (SMAs) - advanced metals that perform in the same way as SMPs, but which are highly expensive.

"I wanted to bring it back to daily life and not only use it for high technology projects, and for that the metals were too expensive," says de Smet. "With polymers, when you produce them in large quantities, it's affordable."

At the moment the items need to be placed in a large heated environment like a sauna to reach the required temperature of 70 degrees, but de Smet is researching other ways of triggering the transition from the compressed to the expanded form, for example by "programming" the material to return to its remembered form when electricity is passed through it.

"At the moment ,it's programmed to expand at 70 degrees, because of the logistics of transport," de Smet said. "For example in the summer and the truck is stuck in traffic, then inside it is building up to 50 degrees and we don't want the furniture to pop, like popcorn."

The foam, which is strong enough to be structural, can be turned into furniture by milling solid blocks of the material or by injection moulding. 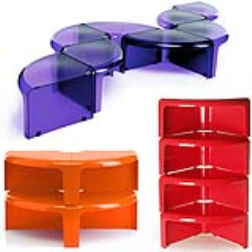 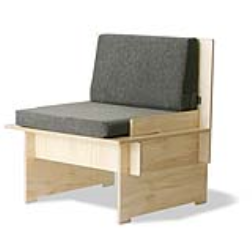 Ready to assemble, no tools needed 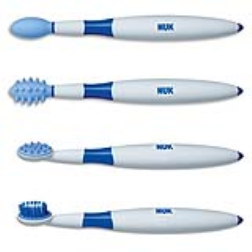