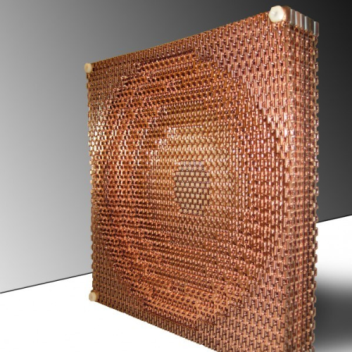 New metamaterial acts as a lens for radio waves

We expect the world to be predictable. Water flows downhill, fire burns and lenses bend light in a particular way. That worldview took a jolt as Isaac Ehrenberg, an MIT graduate student in mechanical engineering, developed a three-dimensional, lightweight metamaterial lens that focuses radio waves with extreme precision. That may not seem too disturbing, but the lens is concave and works in exactly the opposite manner of how such a lens should.

The lens is produced by blocky, S-shaped “unit cells” a few millimeters wide that refract radio waves in particular directions. The roughly concave lens is formed from 4,000 of these cells. They were fabricated from a polymer by means of 3D printing into a self-supporting structure, and then coated with a fine mist of copper. The 3D fabrication technique meant that there was little energy lost as the radio energy passed through the lens, which was a problem with previous lenses made of stacked 2D structures.

The lens produces a level of focus that is so precise that it has the potential for imaging individual molecules. It also has the advantage of being lightweight, which Ehrenberg claims would make it practical for sending into orbit for astronomical observations.