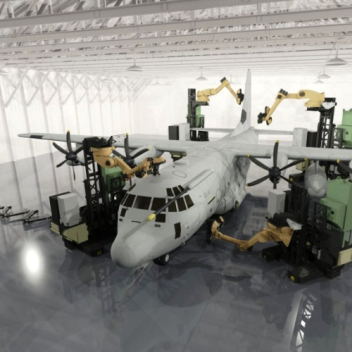 If you think stripping paint off an end table can be a messy, time consuming job, imagine removing paint and other coatings from an aircraft like the C-130 transport plane. Tasked with developing a robotic system that would take such a chore out of the hands of maintenance personnel, Carnegie Mellon University's National Robotics Engineering Center (NREC) and Concurrent Technologies Corporation (CTC) of Johnstown, Pennsylvania, developed a team of robots that gets the job done – using laser beams, no less.

The large robots consist of a mobile platform on which is mounted a large, articulated arm that moves up and down on hydraulic lifts. On the end of each arm is an array of sensors that allow the arm to glide evenly over the plane’s surface and a continuous wave laser that removes the paint in selective layers. The sensors can also assess the plane’s condition as they go. The speed at which they work needs to remain even so that the laser can strip the paint without overheating the plane’s skin. Meanwhile, a custom High Efficiency Particulate Air (HEPA) system safely collects paint debris as it is removed from the aircraft.

How many robots are required for each team depends on the aircraft. Two robots are enough for a fighter, but four robots might be needed for a cargo plane. The system controlling the robots generates plans for stripping the plane, which can be updated as the job proceeds. It also “virtually” masks areas of the plane that shouldn't be touched, so maintenance crews don’t have to run about with masking tape and paper.