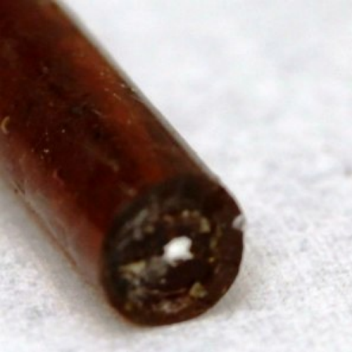 Scientists from North Carolina State University have created conductive wires that stay intact even when stretched up to eight times their regular length.The researchers made the wires by filling a tube of extremely elastic polymer with a liquid metal alloy of gallium and indium. As a result, even when the polymer is stretched to several times its relaxed state, the liquid metal inside of it is still able to carry an electrical current.

If that in itself wasn't spectacularly enough the scientists went one step further and added a self-healing component to the wire. Should the wire be cut in two, the exposed liquid metal at each of the cut ends will oxidize. This causes a thin film to form over the exposed metal. If someone were to then pick up the two pieces of wire and press the severed ends back together, the polymer faces would meld with one another on a molecular level, while the film on the metal would give way, allowing the liquid to flow along the length of the wire once again.

Not only could the wires be useful in devices like earbuds or phone chargers, but they could also find use in smart fabrics or stretchable electronics. Some of NC State’s other approaches to routing electricity through such materials have involved the use of coiled nanowires or carbon nanotubes that straighten out as the material stretches.