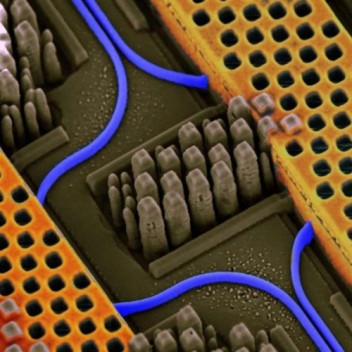 Integrated optics and electronics on a single chip

IBM researchers have managed to shrink optical components to fit alongside their electrical counterparts on a single chip. This advance in the realm of “silicon nanophotonics” paves the road to much higher-performance servers, data centers and supercomputers in the years to come.

The performance of microprocessors increases exponentially as years go by and yet, when it comes to putting together tens of thousands of them to create a supercomputer or a big data center, this doesn't automatically translate into proportionally higher speeds. A system of this magnitude can only move as fast as the slowest of its components and, as it turns out, the main bottleneck here is the speed at which data can be sent across the different processors. The existing copper interconnects are limited in bandwidth and are expensive relative to their performance, costing several dollars per Gbit/s.

The development is expected to bring costs down considerably,to less than a cent per Gbit/s. IBM has already demonstrated optical transceivers exceeding 25 Gbit/s per channel, and showed that multiplexers embedded in the chip can feed parallel streams of optical data into a single fiber to reach much higher speeds.