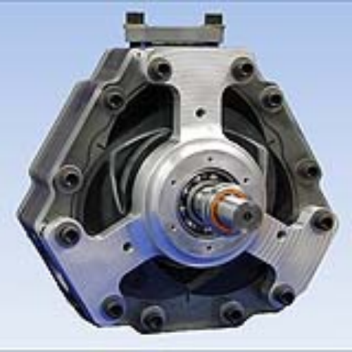 The internal combustion engine (ICE) has had a remarkably successful century and a half. Unfortunately, it’s notoriously inefficient, wasting anywhere from 30 to 99 percent of the energy it produces and spewing unburned fuel into the air. Last week, Gizmag interviewed Dr. Alexander Shkolnik, President and CEO of LiquidPiston, Inc. about the company's LiquidPiston X2 – a 40-bhp rotary engine that burns a variety of fuels and requires no valves, cooling systems, radiators or mufflers, yet promises a thermodynamic efficiency of 75 percent. (Update: The engine has a goal of achieving a 57 percent brake efficiency.)

Co-founder of LiquidPiston with his father Nikolay, Dr. Shkolnik believes that the internal combustion engine is at the end of its development cycle. According to Shkolnik, after 150 years the ICE has made as many incremental improvements as it can. Many varieties of ICE, such as the Otto cycle used by petrol engines and the Diesel cycle, have had their successful points, but all fall short of being as efficient at they could be. Even what seem like very efficient engines, like the diesel, aren't as good as they might appear.

“Everyone would say at first glance that the diesel engine is more efficient (than the petrol engine). The truth is that if you had both engines at the same compression ratio, the spark-ignited engine has a faster combustion process and a more efficient process. In practice, it’s limited to a lower compression ratio otherwise you get spontaneous ignition.”

LiquidPiston’s approach to the problem was to go back to the basics of thermodynamics and work forward to develop what Shkolnik calls the “High Efficiency Hybrid Cycle” (HEHC), which combines the features of the Otto, Diesel, Rankine, and Atkinson cycles.

The idea is to compress the air in the LiquidPiston X2 engine to a very high ratio as in the diesel cycle and then isolating it in a constant volume chamber. When fuel is injected, it’s allowed to mix with the air and it auto-ignites as in a diesel engine, but the fuel/air mixture isn’t allowed to expand. Instead, it’s kept compressed in a constant volume so it can burn over an extended period, as in the Otto cycle. When the burning fuel/air mix is allowed to expand, it’s then overexpanded to near-atmospheric pressure. In this way, all the fuel is burned and almost all of the energy released is captured as work. Shkolnik calls this use of constant volume combustion “the holy grail of automotive engineering.”

Constant volume combustion and overexpansion provide an HEHC engine like the X2 with a number of benefits. Shkolnik points out that the X2 engine is exceptionally quiet because it burns all of its fuel. In current ICE engines, an alarming amount of fuel goes out the tailpipe. This not only cuts down on fuel efficiency and pollutes the air, it also makes the engine noisy. Since the X2 engine burns its fuel completely, there’s no need for complicated silencing apparatus. (Update: The engine runs quietly due to not needing poppet valves.)

The overexpansion used in the cycle also means that there is very little waste heat. An ICE only converts only 30 percent of its heat into work while the X2 engine has a thermal efficiency of 75 percent, so a water cooling system isn’t necessary. Water may be injected into an HEHC engine during compression or expansion for cooling, but doing so also helps to lubricate and seal the chamber and as the water cools the engine it converts into superheated steam, which boosts engine efficiency.

Shkolnik says that the X2 engine is a rotary because piston engines aren’t suitable for the HEHC and a rotary engine provides much more flexibility. Also, the use of a rotary design greatly simplifies the engine with only three moving parts and 13 major components required. That allows the X2 to be one-tenth the size of a comparable diesel engine.

When asked whether the X2 engine isn’t just an updated Wankel, Shkolnik pointed out that though both are rotary engines, the Wankel is very different. For one thing, it uses a straightforward Otto cycle like a piston engine and operates at a much lower compression rate than the X2. In comparison, the X2 engine is almost the opposite of a Wankel. “It’s almost like the Wankel engine flipped inside-out,” said Shkolnik.

Not only does the X2 engine work on a different principle from the Wankel, but it doesn't suffer from the same limitations. The X2 engine has a better surface to volume ratio, it doesn’t have the thermodynamic limitations of the Otto cycle and it doesn't have the emissions problems of the Wankel. The Wankel has apex seals that are carried around with the rotor and need to be lubricated. To do this, oil has to be sprayed on them, which means that the Wankel is burning oil as it runs, resulting in the high emissions that have recently curtailed its use. The X2 engine, on the other hand, moves the seals from the rotor to the housing, so no special lubrication is required.

Another way that the X2 engine differs from the Wankel is that Shkolnik has no intention of it sharing the same fate as the Wankel, which turned into an automotive also-ran when put head to head with the ICE or hybrid electrics to power motor cars, (though he admits that the X2 engine would be an excellent range extender for hybrids). Instead, he plans to go after niche markets that can use the X2’s peculiar strengths.

One place where the X2 engine may have an advantage is in auxiliary power units (APUs). Shkolnik said that an enormous amount of diesel fuel is wasted by lorry drivers for “hotel” purposes. That is, when they stop overnight they leave their engines idling to provide power for the living amenities of their long-distance rigs. Small, lightweight diesel power units with high fuel efficiency, he believes, would be particularly attractive.

Another area is military applications. The U.S. military has a need for APUs that can run on heavy fuels, which the X2 engine can. Also, the Pentagon is very keen on developing robots. According to Shkolnik, “you can do amazing things with robots, but ask a robot to carry this giant engine and there’s problems.” He believes that the X2 engine may be the answer to these problems. In addition, the military has need of APUs for tanks, which suffer from extremely bad fuel efficiency from idling to run electronics.

Currently, LiquidPiston is running its original X1 engine in tests, which has been built after only a year from its first design concept. This month, the company unveiled the X2, which is a more fully integrated engine with a simpler construction, at the DEER Conference in Dearborn, Michigan. Shkolnik says that the X2 will be available for partner tests in 2013 as a new round of financing is launched and he hopes to have a preproduction prototype by 2014.