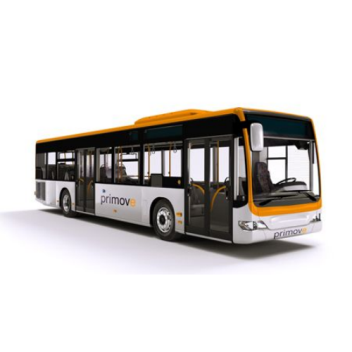 Regional German transport operator Rhein-Neckar-Verkehr GmbH (RNV) is set to carry out a pilot project to test the viability of wireless inductive charging technology of electric buses. The trial will see two electric buses fitted with Canadian transportation manufacturer Bombardier's PRIMOVE inductive charging technology, which will enable them to be recharged wirelessly as they let passengers on and off at bus stops along the inner city route 63 in Mannheim, Germany.

Inductive charging technology sees the wireless transmission of energy taking place between components embedded under the road surface and receivers mounted under the vehicles. The proponents of the technology say it eliminates the need for lengthy overnight plug-ins and lets vehicles be outfitted with lighter and smaller batteries, while allowing them to operate for longer periods.

With support from the Karlsruhe Institute of Technology, the PRIMOVE Mannheim project will help determine how this type of technology fares on a busy route, thereby giving researchers real world data to improve infrastructure, batteries and the daily operation of a system based on magnetic induction. Public transport companies will also be able to assess the competitiveness and acceptance of the technology by the public.