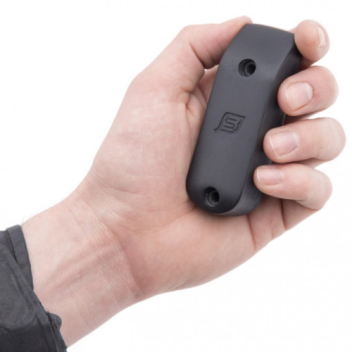 Bicycles are a notoriously easy target for thieves, but technology is here to help in the form of a new device that promises to help cyclists safeguard their property and recover it if stolen. Currently seeking funds on KickStarter, the Chicago-based BikeSpike team has designed a new bicycle GPS tracker.

The BikeSpike isn't meant to replace a locking system, but rather add another layer of security, one that can be disguised with a custom water bottle cage. After physically locking their bike in the normal way, the cyclist can then "digitally lock" their vehicle by arming the device via a web, iOS, or Android app. If the bike moves out of a predefined boundary, the user receives an alert telling them the bike is on the move.

Besides security, BikeSpike can also act as a safety device. A collision detection system that makes use of the device's three-axis accelerometer can alert people in a contact list and share the location of an accident. The accelerometer sensor can also monitor road quality by looking at the vibrations detected, while parents can use the BikeSpike to monitor their kids while they are out on a ride.

BikeSpike will ship with security fasteners and a special installation tool to make it harder for the system to be removed. Even if the thief were aware of the hidden BikeSpike device and had the special security installation tool, the designers say it would still take some time to get the job done, at the risk of damaging the frame.

Each BikeSpike will ship with an AC wall charger, with the team estimating that a once-a-month recharge will be enough for casual riders. They can also get notifications of when the battery is running low.