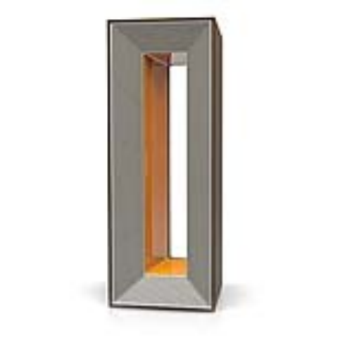 Some time ago, astronauts on the International Space Station needed a way to eliminate the ethylene gas that was being produced by plants growing aboard the station. NASA collaborated with the University of Wisconsin, and the result was an air-purifying system known as Airocide. Flash forward to the present, and that technology has been licensed for use in a household product that reportedly eliminates all sorts of airborne nasties.

Airocide purifiers have actually been in use in places such as grocery stores and food-packing plants since 1998, and were introduced to medical settings such as hospitals in 2003. Now they're finding their way into the home for the first time.

Each Airocide unit incorporates a reaction chamber that contains thousands of tiny glass rings coated inside and out with titanium dioxide (TiO2). With the help of a high-intensity light, the TiO2 produces hydroxyls. When airborne organic molecules are drawn in and make contact with those hydroxyls, the carbon bonds in those molecules are broken.

In this way, virtually any organic compound passing through the reaction chamber is rendered inert. The hydroxyls are tethered to the TiO2 surface, and can’t escape from the chamber. No ozone or other gases are released, no chemical additives are used (besides the already-present TiO2), and nothing needs to be cleaned out. The reaction chamber does need to be replaced approximately once a year, however.

According to the Airocide company, the purifiers are almost 100 percent effective at neutralizing biological pollutants like mold, fungi, pollen, dust mites, viruses and bacteria, along with volatile organic compounds (VOCs) that are given off from materials such as carpeting and paint.