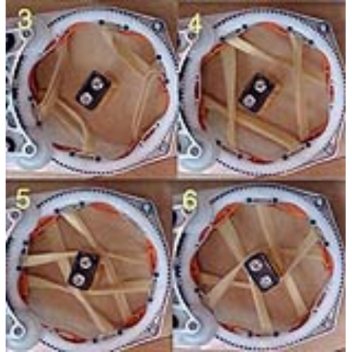 The KUKA YouBot Omni-Directional Mobile Platform with Arm is a small, arm-on-a-skateboard type of robot that can perform simple tasks. Recently Ross Knepper, a robotics reseacher at MIT, and his team hacked up a couple of them to assemble store-bought IKEA furniture. While it was primarily an exercise, versus designing a commercially-viable product, we were pretty impressed by his solution for screwing the legs into the Lack sidetable that you'll see here:

The YouBot doesn't come with an "end effector" that can perform the rotating motion you and I would do with two hands to get that leg into the table. Knepper's team devised an elegant workaround, using rubber bands attached to two different rings:

We designed a spinning gripper tool, the Torq Gripper, which specializes in screwing-type operations...over many revolutions to a shape with either circular or non-circular cross section. The new robotic gripper uses multiple elastic cables to compliantly constrain and then spin an object....

The Torq gripper functions by the encirclement of the target object with flexible elastic members.... The elasticity and resulting compliance of the cables allows the robot to handle uncertainty in the relative position and orientation of the part. Second, both ends of each cable connect to movable rings, which enables the device to easily rotate the part after it has been grasped.

...Elasticity permits the tool to be non-destructive in its application of force, which is distributed almost uniformly around the circumference of object. Additionally, the elastic nature of the force application permits considerable error in position and orientation during operation.

Knepper and co. have not publicized any intentions of commercializing their findings—but how cool would it be to see a universal wrench created using rubber bands?