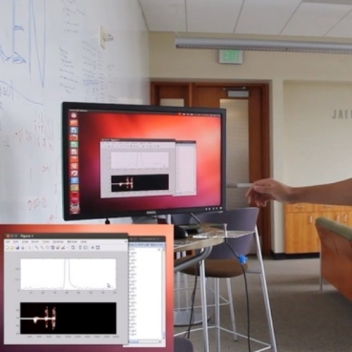 Researchers at the University of Washington have successfully created a prototype of a system that uses Wi-Fi — and only Wi-Fi — to detect gestures. Called "WiSee," the system cleverly measures the Doppler shifts created by human movement on regular Wi-Fi signals. That means that the system doesn't require line of sight for gesture detection and, the researchers claim, it could work with off-the-shelf Wi-Fi systems. If using Wi-Fi to detect gestures isn't wild enough, the researches claim that "The average accuracy is 94% with a standard deviation of 4.6% when classifying between our nine gestures."

What sets WiSee apart is that it's able to detect gestures in the next room, and the prototype was tested in a two-bedroom apartment to prove it. A Wi-Fi base station with multiple antennas and MIMO support would be able to distinguish between multiple humans, though the researchers also suggest that piggybacking off a solution used in many Kinect games would work better: having each user perform an identifying gesture before performing the controlling gesture.

Obviously the technology is still in its infancy, but the researchers foresee the ability to control any sort of electronics in the home, from appliances to televisions. It's not the only new way that Wi-Fi is being used in innovative new ways, earlier research utilized the wireless technology for in-building location.