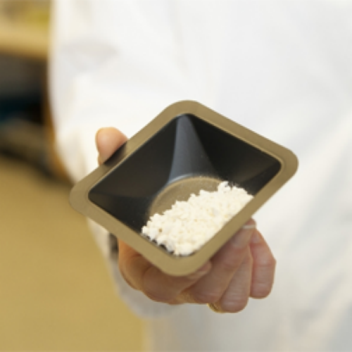 In science, nothing is impossible, only highly improbable. But that doesn't stop scientists from celebrating a new discovery or creation previously deemed impossible. Researchers from Uppsala University in Sweden, have published results about the creation of a new supposedly impossible material that they are calling "Upsalite." Upsalite is a magnesium carbonate material that has already broken world records with its surface area and water absorption abilities.

According to previous scientific research, ordered forms of magnesium carbonate occur in nature, but water-free disordered forms have been difficult to make. However, Johan Goméz de la Torre, researcher at the Nanotechnology and Functional Materials Division has now figured out that magnesium carbonate can be created in a simple, low-temperature process.

As with many great scientific discoveries, this new development occurred because of a mistake. Attempting to work from previous experiment data, some test material was accidentally left in a reaction chamber over a weekend. When the scientists returned to work on Monday morning, they discovered that it had formed into a rigid gel. They dried the gel and realized they had created something previously not thought possible. This led to a year of fine tuning and analysis, along with a host of other experiments. After going through a number of state of the art materials characterization techniques, it became clear that they had actually synthesized an impossible material.

Perhaps the most surprising discovery, though, was the properties of this new material. Upsalite has the highest surface area measured for an alkali earth metal carbonate: 800 square meters per gram. This puts the material in a very exclusive class of porous, high surface area materials that includes silica, zeolites, metal organic frameworks and carbon nanotubes. The research team also found that the material was filled with empty pores, which gives it a unique way of interacting with the environment. For example, Upsalite can absorb more water at low relative humidities than any other currently available material.

These unique properties could lead to Upsalite being useful in a variety of industrial applications, including the collection of toxic waste, chemicals, and oil spills. It could also prove useful for drug delivery systems, odor control, and sanitation after a fire.