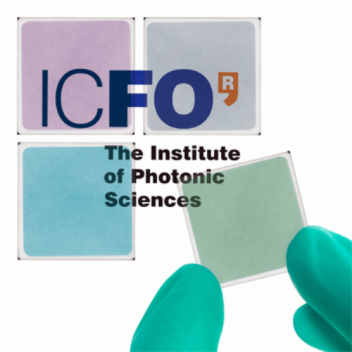 Imagine buildings in which the windows allow the sun's light to enter, and at the same time capture the energy from the sun needed to meet all their energy needs. In this seemingly futuristic scenario, the windows become productive solar cells that help us decrease our reliance on fossil fuels and advance towards a greener and cleaner environment. In a recent study carried out at ICFO, researchers have fabricated an optimal organic solar cell with a high level of transparency and a high power conversion efficiency, a promising step forward towards affordable, clean, more widely utilized and urban integrated renewable energies.

Organic solar cell technology has been around for about thirty years, however nowadays it is starting to attract substantial interest due to its low production cost. While organic cells have not yet reached the efficiency values of silicon based cells, these Organic Photovoltaic (OPV) cells have proven to be lighter in weight, more flexible (they are capable of adapting to curved surfaces), and even more sensitive to low light levels as well as indirect sun light, making them one of the most appealing photovoltaic technologies for many everyday applications. Among such advantages, a property that makes them even more interesting is their potential to be implemented as a semi-transparent device.

ICFO researchers have been able to implement a semi-transparent cell incorporating a photonic crystal and reach a cell performance almost as good as its opaque counterpart. By adding such extra photonic crystal to the cell, ICFO's scientists were able to increase the amount of infrared and ultraviolet light absorbed by the cell, reaching a 5.6% efficiency while preserving a transparency almost indistinguishable from normal glass. The results in efficiency and transparency make these cells an extremely competitive product for Building-Integrated Photovoltaic (BIPV) technologies. To reach the adequate architectural look, the color of the cells may be tuned by simply changing the layer configuration of the photonic crystal.

Jordi Martorell, UPC Professor at ICFO and leader of the study, explains that "applications for this type of technology in BIPV are just a few steps away, but the technology has not reached its saturation point yet. ICFO's discovery opens the path for innovation to other industrial applications of transparent photovoltaics. In the midterm we expect to reach the extremely high transparencies and efficiencies needed to power up devices such as displays, tablets, smart phones, etc…"