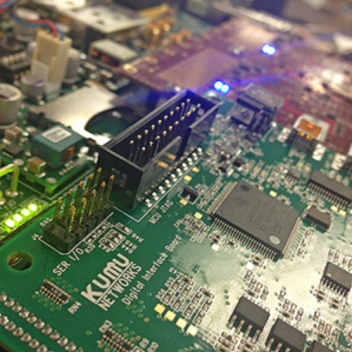 A startup spun out of Stanford says it has solved an age-old problem in radio communications with a new circuit and algorithm that allow data to be sent and received on the same radio frequency—thus doubling wireless capacity, at least in theory.

The underlying technology, known as full-duplex radio, tackles a problem known as “self-interference.” As radios send and receive signals, the ones they send are billions of times stronger than the ones they receive. Any attempt to receive data on any given frequency is thwarted by the fact that the radio’s receiver is also picking up its own outgoing signal.

For this reason, most radios—including the ones in your smartphone, the base stations serving them, and Wi-Fi routers—send information out on one frequency and receive on another, or use the same frequency but rapidly toggle back and forth. Because of this inefficiency, radios use more wireless spectrum than is necessary.

To solve this, Kumu built an extremely fast circuit that can predict, moment by moment, how much interference a radio’s transmitter is about to create, and then generates a compensatory signal to cancel it out. The circuit generates a new signal with each packet of data sent, making it possible to work even in mobile devices, where the process of canceling signals is more complex because the objects they bounce off are constantly changing. “This was considered impossible to do for the past 100 years,” says Sachin Katti, assistant professor of electrical engineering and computer science at Stanford, and Kumu’s chief executive and cofounder.