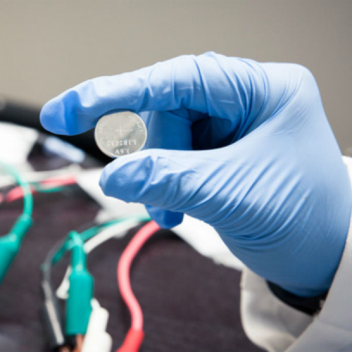 The problem with lithium ion batteries is that the more discharge cycles you put them through, the less efficient the negative electrode becomes at holding electrons. This just won't do in our mobile future, so researchers at Stanford University have developed a battery that actually heals itself. It's nearly alive.

Researchers have been working to increase the energy density of modern lithium ion batteries while reducing their weight for a number of years now, with mixed results. One of the most promising advances has come from incorporating silicon into the cathode, which allows it to hold far more electrons than the current oxide mix. However physically silicon swells, up to 300 percent, when filled with electrons and shrink back down as they're expended. This leads the material to crack and splinter within a few discharge cycles.

The self-healing polymer developed by Stanford's Chao Wang and Hui Wu of Beijing's Tsinghua University doesn't actually stop that cracking, it simply instantly repairs it. See, the team deliberately weakened a few key bonds within the polymer so that while those weakened bonds would easily break, they'd be chemically attracted back towards one another, re-bonding as soon as they're snapped apart.

The electrodes currently only work for about 100 charge cycles without failing. The team hopes to boost that performance to 500 cycles for cell phones and 3,000 cycles for electric vehicle applications with future iterations.