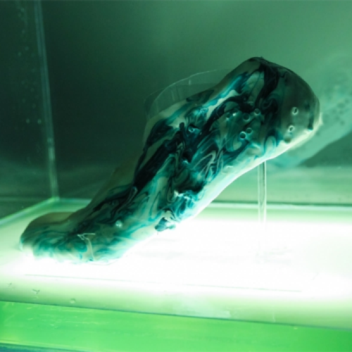 Shamees Aden's created a concept of a self-healing shoe printed to fit your foot from the building blocks of life itself.

At least that's what this concept wants to be when it's put into production. Aden's exhibit was part of the Wearable Futures event held in London, and her vision of the future of running shoes is truly something from the pages of sci-fi. Scientists are just beginning to create and utilize bio-inks in the lab, but Aden has looked a little way down the rabbit hole to a time when printing biological structures is commonplace.

Protocells are tiny structures that are just on the cusp of being alive. Individually, they are considered to be non-living, but when they are put together they can be designed to take on aspects of life. Basically they're tiny, synthetic quasi-living structures that can be created in whatever image we want. They're also the substance that Shamees Aden proposes we 3D print running shoes from. Protocells designed to inflate when they sense pressure could form the sole of your shoe, cushioning your every step by instinct.

Once they're no longer on your feet and sensing that constant pressure, the protocells would go dormant once more. Taking them off and dipping them into a jar filled with protocell liquid would allow the shoes to heal themselves after use. Think of them as a sort of wearable house plant that needs to be watered after you slip it on. And just like a house plant, you could have a little fun with your protocell shoes by introducing food coloring to its food and then watching it ingest the color as it feeds. Plus, you'd get some sweet self-designed trainers out of the deal.

As cool as protocell technology is, science is just beginning to unravel its potential. If you're thinking of 3D scanning your feet today so you can send Aden the specs for your own pair of living trainers, you'll have a long wait. The shoes are currently just a concept, one which Aden thinks can surely be made into reality, but likely not before science catches up with her imagination, sometime right around the year 2050.