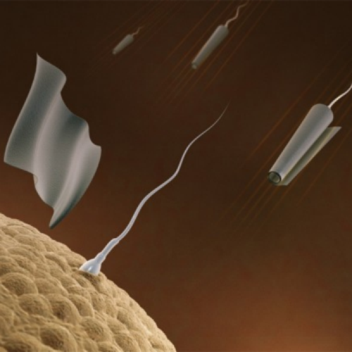 Hijacking sperm cells to create little robots might seem far out, but that's exactly what researchers from the Dresden Institute for Integrative Nanosciences have done. Their "spermbots" consist of live sperm cells in little tubes, that can be magnetically controlled to move in a desired direction until they reach their destination and do their job – they're currently robust enough to even guide a specific sperm cell to an egg cell. The scientists hope that further development will allow the technology to offer a viable alternative to parents trying to have a child through in-vitro fertilization. When perfected, the spermbots could also be used as a safe means for drug delivery and gene manipulation.

One of the major challenges in creating micro robots that can potentially travel within the human body is the issue of a safe fuel source. Nanobots with engines efficient enough to propel themselves through bodily fluids need to carry fuel that's often toxic to the human body, and sometimes these machines can pass through into the cells and affect their functioning. To overcome these problems, the Dresden team began looking at safer alternatives to artificial nano engines.

The team plans to try assisted fertilization with animals before starting experiments and clinical trials with human sperm. Since it's possible to control the path of these spermbots to the tune of a few micrometers, the spermbots could ultimately also be utilized to ferry drugs and payloads anywhere within the body.