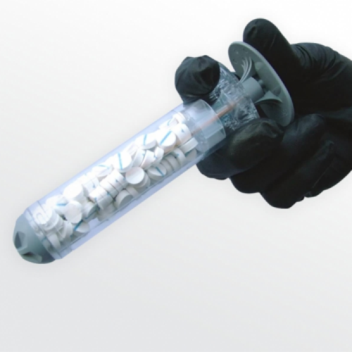 On the battlefield, every second counts, especially for medics treating the wounded. Treating wounds and stopping bleeding usually comes down to packing the wound with gauze, which isn’t always effective. In fact, if bleeding continues, a medic has to pull out the gauze he’s already put in it and start packing the wound again.

However, a group of veteran medics and scientists have teamed up to create something better: a syringe filled with tiny sponges that can not only stop the bleeding in such wounds, but do it quickly and more effectively than any other modern method.

The company, RevMedx, found inspiration in Fix-A-Flat foam, used for tire repair. They wanted something similar for wounds: something that could be applied to the wound, would expand and soak up all the bleeding, as well as prevent further bleeding.

Foam, however, wouldn’t work: gushing blood would just push it back out of the wound. The answer for the right material was obvious: sponges. RevMedx's experiments began with regular sponges that they cut into small pieces and then tested on animals. Their results were so impressive that the U.S. Army gave them $5 million to create their new product.

Unfortunately, the team knew that they couldn’t use regular non-sterile sponges in the human body. Instead, they created their own with wood pulp and shrimp shells. They also marked each small piece of sponge so that if one got accidentally left inside a body, it would turn up on an x-ray. These new sponges were just as effective as their initial experiment and succeeded in stopping bleeding from an animal’s wound in just 15 seconds.

Only one question remained: how do you deliver the sponges into the body? The idea is to pack a wound as close to an artery as possible. The research team settled on a syringe that injects the small pieces of sponge directly into the wound. Even better, the syringe is lightweight and less bulky than the many rolls of gauze that medics carry in their bags.

FDA approval is forthcoming for this new method (interestingly enough, gauze itself was never approved for use inside the human body, but medics do what they have to do when it comes to stopping a nasty wound from bleeding). Its applications, however, aren’t just limited to the battlefield. This sponge syringe could also stop internal bleeding from victims of other accidents and could even be used by E.M.Ts when called to emergency situations.