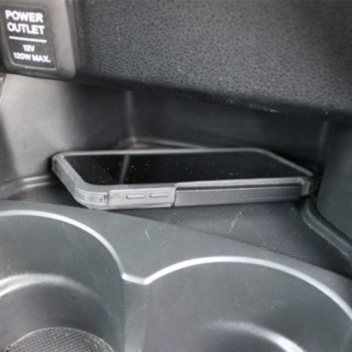 Charge Your Phone Using Vibrations From Your Car

While it's already possible to wirelessly recharge smartphones in cars, those cars need to be equipped with a special charging pad that the phone has to be placed on. Thanks to a newly-developed "nanogenerator," however, it might eventually be possible to place the phone anywhere in any car, letting the vehicle's vibrations provide the power.

It's made from a piezoelectric polymer known as polyvinylidene fluoride, or PVDF. Like other piezoelectric materials, PVDF generates electricity when subjected to mechanical strain.

The scientists deposited nanoparticles of zinc oxide into a thin film of the polymer, but then etched those particles out again, leaving tiny interconnected pores where they had been. The presence of those pores caused the ordinarily rigid PVDF to take on a sponge-like consistency, allowing it to flex and thus generate electricity when subjected to even slight vibrations – having the weight of a phone pressing down on it would amplify the effect.

That film is sandwiched between two electrode sheets, the whole multilayer nanogenerator still remaining quite thin and flexible. Because of this quality, it could conceivably conform not just to the flat, rigid housings of phones or other devices, but also to a variety of irregular surfaces including human skin.