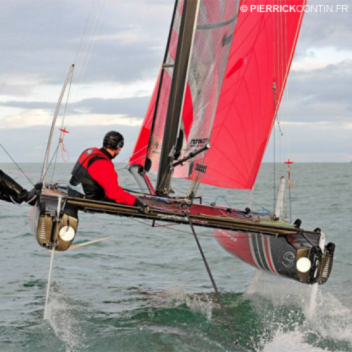 “It’s like removing the handbrake – suddenly everything gets smoother and faster in pure silence.” This gravity-defying catamaran rises completely out of the water at speed on a pair of hook-shaped hydrofoils. It looks like the work of David Copperfield, but it’s real, and it’s set to start a revolution in the sailing world.

The Flying Phantom can get up on its foils in wind as low as 7 knots sailing downwind or perpendicular to the breeze, or upwind if the wind speed is above 10 knots. Its current tested max speed has been 33 knots, but Felix believes that limit can still be pushed: "The next limit is the cavitation issues you get around 45-50 knots.”

Apart from the vast reduction in drag, another benefit of hydrofoiling is that once the boat is out of the waves, the ride gets a lot smoother. Sailors who have spend years being beaten around the hindquarters by choppy waves are reporting that the foiling experience feels as much like a magic carpet ride as it looks. Of course, if something goes wrong and the boat crashes back down into the water, there could be some pretty serious deceleration in effect that might negate any comfort advantage pretty quickly, to put it mildly.