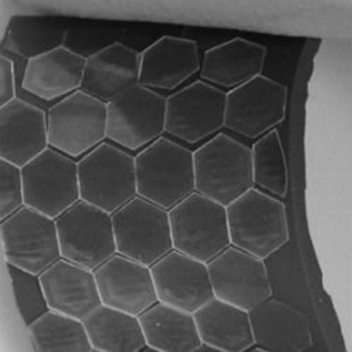 Animals like crocodiles and armadillos have natural armor that’s basically a bunch of hard plates embedded in soft tissues. A team of mechanical engineers led by McGill University associate professor Francois Barthelat developed a new material that mimics this protection.

In the lab they used a laser to carve a glass plate into hexagonal segments, which was then attached to a soft rubber substrate with silicone glue. The engineers tested their flexible armor by trying to puncture it with a sharp steel needle. Compared to unsegmented glass, the armor displayed an increase in puncture resistance of up to 70 percent.

“What was the most surprising is that the resistance to puncture of our bio-inspired segmented armor was greater than the same system without the segments,” Barthelat told me. “ suggests that this design not only provides flexibility, but also improves protection.”

The researchers, who reported their findings in the journal Bioinspiration and Biomimetics (abstract), think the material could have applications in protective coatings, flexible electronics and personal armor.

Although they used glass in the lab because it made fabrication easier, Barthelat said the team is exploring better materials to use in the armor, such as advanced ceramics. But that’s not for a little while, crocodiles.