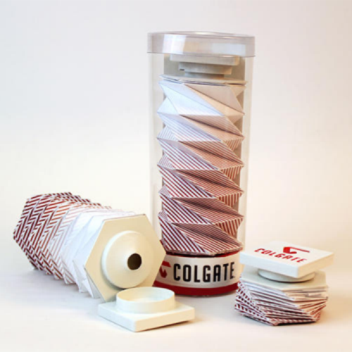 Origami Toothpaste Tube That Squeezes Out Every Last Drop

Before a 19th-century Connecticut inventor named Washington Wentworth Sheffield came up with the idea of using a collapsible lead tube for long-term toothpaste storage, people used to keep the stuff in jars. But it's kind of incredible that a toothpaste tube design from the 1890s has survived mostly unchanged to this day, despite its inefficient packaging. One Consumer Reports test on Crest and Colgate tubes found that up to 13% of the packaged toothpaste would be wasted, even when the user pushed, pulled, squeezed, and otherwise abused the tubes to get it all out.

Then, late last year, 22-year-old interior architecture design major received an assignment in one of her Arizona State University classes. She would have to redesign the classic Colgate tube, along with the company's logo. So, inspired by origami and a collapsible ketchup bottle, she came up with a tube that would do a less wasteful job of delivering paste onto the brush.

"I found this little tiny bottle--it looked like it was for a kids' toy--and it was a collapsible ketchup bottle. It just goes up and down, accordion style," Pannuzzo says. "From that I knew it could be done, somehow. So that's why I kept going with the origami thing. It was mostly just experimenting."

Pannuzzo's collapsible design certainly looks cool, but she admits she hasn't put it through any rigorous tests. Commenters on the Smithsonian blog, which originally discovered her invention, have also been quick to point out that the tube's many creases could also serve as traps for toothpaste.