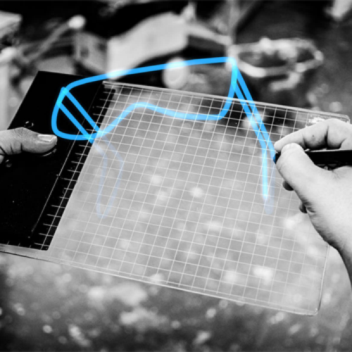 A group of Royal College of Art students–Guillaume Couche, Daniela Paredes Fuentes, Pierre Paslier, and Oluwaseyi Sosanya–has developed a tool called GravitySketch that starts tracing an outline of how these systems could work as creative tools.

Their high-tech sketchpad looks a bit like a prop from Tron, with its etched grid of transparent plastic and sternly rectilinear user interface panel, but the goal is to make augmented reality feel as natural and organic as sketching in a notebook. Artists hold the acrylic drawing tablet like its analog counterpart and sketch with a custom stylus. Radio frequency sensors record the movements and coordinates on the pad and send them to an Arduino hidden in the black box on its edge. No lines are actually drawn on the pad, but the artist sees them float in air through a pair of augmented reality glasses wirelessly connected to the Arduino.

The real trick of GravitySketch is that, rather than requiring artists to master tricks like perspective or foreshortening to suggest depth and physicality, they can simply rotate the tablet and draw lines that connect to their previous marks, creating a sense of form in the process. The drawings hang in space, can be approached from any angle, and can be rotated like physical objects.

A solo sketch can quickly become a jam session if several people surround the drawing, allowing people to collaborate in real time with none of the loss that comes from sharing ideas asynchronously and in traditional formats.