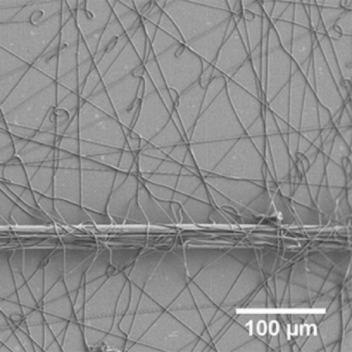 Spider-Inspired Discs Could Be The New Glue

Researchers from the University of Akron have recently created their own version of the "attachment discs" that spiders use to secure their silk fibers to surfaces, when building webs. These man-made discs could conceivably prove superior to conventional glues as a form of adhesive.

When spiders want to join a silk fiber to a surface, they don't simply press the end of that one fiber to the surface and hope that it holds. Instead, they pin it down by depositing an array of finer fibers that criss-cross over top of it – sort of like the staked-down ropes that the Lilliputians used to hold down Gulliver, in Gulliver's Travels. That jumble of fibers is known as a pyriform attachment disc.

Led by Prof. Ali Dhinojwala, the U Akron team created artificial versions of these discs, using electrospun polyurethane fibers. These were used to effectively hold underlying nylon threads to surfaces.

It is now hoped that such discs could one day serve as a type of inexpensive biomedical adhesive, perhaps being used to bind fractures or bond ligaments onto bone. They might also simply become a stronger alternative to conventional glue and tape.