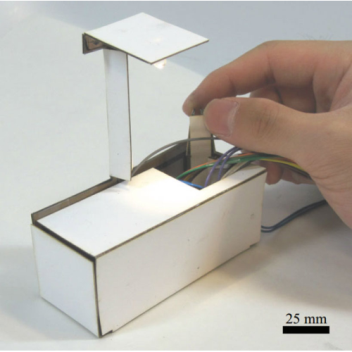 Printable Lamp That Folds Itself Up for You

A team of researchers from the Wyss Institute for Biologically Inspired Engineering at Harvard University, have developed a 3D printed robotic lamp capable of self-assembling. Presented at the IEEE International Conference on Robotics and Automation (ICRA), the proof-of-concept lamp can be printed on demand, folds itself, and includes both a mechanical switch and a capacitive touch sensor. Because the lamp is made of shape-memory polymers, thin layers of copper, and layers of paper and foam, it can go from one state to another with only a slight temperature change. It starts out as a flat sheet and triggered by heat, it folds up into a box.

The lamp, including the shape-memory polymers, structure, mechanical switch, most of the wiring, and even the capacitive touch sensors were 3D printed. According to the research team, ‘the self-assembling lamp demonstrates the potential for the rapid and inexpensive production of self-folding machines that can interact with the environment. it showed that even complex mechanisms, such as the mechanical switch, can be integrated into the self-folding process of a larger machine, and utilized in practical electronic circuits.’