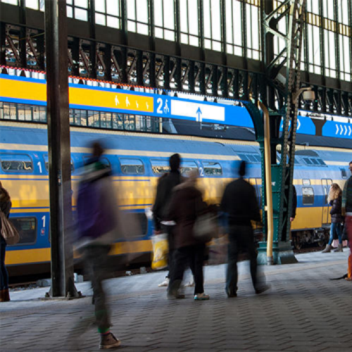 Signs That Ensure You Always Get A Seat On The Train

Getting on a train always involves a certain amount of guesswork. You don't know where the train will stop on the platform or where you should stand to get a seat. One car might be full, another nearly empty. Inevitably, you're stuck boarding the former (or running madly for the latter).

Long, illuminated blocks of blue span the length of each car, marking the space where the cars will pull in (and where the gaps between cars will be). Using information from infrared sensors in the train doors, the sign notes where seats are available--a block of green means that part of the train is empty, orange means semi-crowded, and red means that section is full. A white block with a perpendicular arrow indicates where the door will be once the train stops. Large numbers reveal whether each car is for first or second class, and symbols near the door signs--like a man with his finger to his lips--show where to stand for the quiet car, where you can board with a bike and which entrances are handicap-accessible.

A four-month pilot test in 2013 using the system in the Den Bosch railway station in the southern Netherlands proved successful in improving customer satisfaction, according to Dutch Railways. "We saw the people behave just as we wish they do," Holthius says. "They waited in line at the place they could expect the doors. There was almost no movement on the platform." The only complaint about the service was that it wasn't implemented in more stations, he says.

Curiously, the designers found that an app, which conveyed the same information, was not received as well. Looking at your phone is not always the best way to navigate through physical space. (Who hasn't managed to walk the wrong way even while staring intently at Google Maps?) Standing in front of a sign--something in the real world--feels more natural.

Now, NS and ProRail are working to implement the system in more stations, though it may take a few years. The first step will be installing the infrared counting system in all trains. Then, Holthius estimates that LED screens--a total length of around 50 kilometers (about 30 miles)--will need to be installed in stations. In the meantime, other European countries have reached out about potentially implementing the system elsewhere. "I think it’s a universal problem," Holthius says.