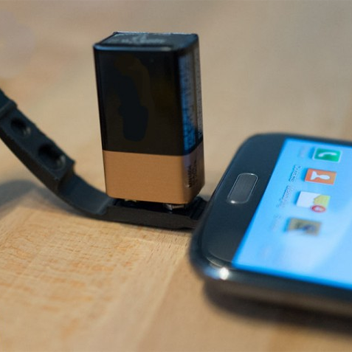 Smartphones are more powerful than ever, but they still have an annoying tendency to run out of juice just when you need them most. The Kickstarter-backed Plan V could get you out of such a fix, as it's a small and light keyring-based device that can be used to charge your smartphone from a 9-volt battery.

Likened by its Sydney-based creator Flintu to a car jumper cable for phones, the Plan V isn't a typical battery charger like the LithiumCard, as it contains no power of its own. Rather, it's a very small adapter that enables you to plug your phone or similar device into a 9-volt battery that you supply.

The idea is, if your phone dies or gets too low on juice, you whip out the Plan V and attach it to a 9-volt battery, thus getting you around four hours additional talk time on a Galaxy S5 (as an example).

This comes with a glaring drawback, in that you'll need to either carry a battery around or be near somewhere that sells one. Still, at least the Plan V only weighs 7 grams (0.24 oz), and is around the size of a key, so it shouldn't weigh heavy on your keyring.

At present, the Plan V charges devices like the Samsung Galaxy S5 via Micro USB, but Flintu aims to add a stretch goal to its Kickstarter to try and get Apple MFI certification and offer a version for the iPhone too.