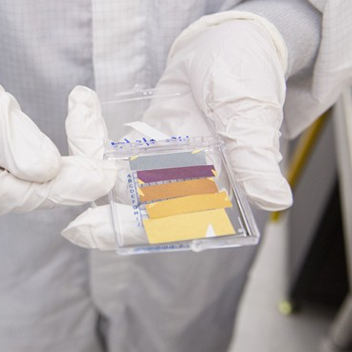 Most people probably don't think of a coating of paint as being a particularly major component of a manufactured item. If the object is quite large, however, or if a lot of them are being made, paint can add considerably to its weight and/or production costs. With that in mind, researchers from Harvard University's Laboratory for Integrated Science and Engineering have created a new lightweight, low-cost coloring technology for both rough and smooth surfaces.

Developed by PhD student Mikhail Kats and his advisor Prof. Federico Capasso, the process involves using a machine known as an electron-beam evaporator to vaporize pieces of metal, by striking them with a stream of electrons. The vapor travels upwards through a vacuum chamber within the evaporator, and collects on the surface of a metallic item placed at the top (if the item isn't metallic, an initial base layer of vaporized metal vapor can first be applied). By repeating this process, multiple layers can be deposited on the item.

What results is an ultra-thin coating. Due to the nature in which that coating scatters reflected light, it appears to the human eye as a given color – exactly which color depends upon the metals used, and the ratios in which they're applied.

In a test of the technology, Kats coated a piece of paper with a film made up of gold and germanium. While a previous study had shown that the technique worked on smooth surfaces, this was the first time that it had been successfully applied to a rough surface.

The paper remained flexible, even after the coating was applied. Although the color appeared basically the same when viewed from different angles, the "hills and valleys" within its microstructure added some subtle variation to the light-scattering process. This caused it to have a somewhat pearlescent appearance, which could be desirable in many applications. Using a different application technique, however, the color could be made to appear completely uniform from any angle.

Although gold is an expensive metal, very little of it was required. Additionally, a number of other metals can be used, including not only germanium but also aluminum. "This is a way of coloring something with a very thin layer of material, so in principle, if it's a metal to begin with, you can just use 10 nanometers to color it, and if it's not, you can deposit a metal that's 30 nm thick and then another 10 nm," said Kats. "That's a lot thinner than a conventional paint coating that might be between a micron and 10 microns thick."

According to the university, the technology could be used to color virtually any material, including those that are rough or flexible. Additionally, because the coatings absorb a lot of light, they could find their way into optoelectronic devices such as photodetectors and solar cells.