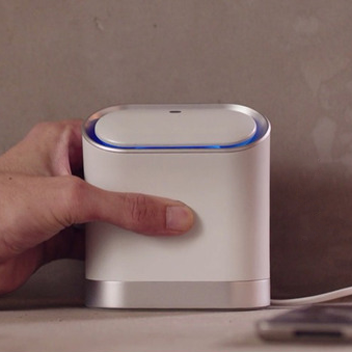 Keewifi is a router that aims to be easier to use than an ordinary router, as well as being safer by completely eliminating the use of passwords. Rather than entering a passcode, devices are connected to the Keewifi by putting them right up to the device -- tapping it, for example -- and are managed using the device's Android and iOS apps. With this, it is impossible for someone to connect to the network by guessing the password (since it doesn't use one).

This type of connection is achieved using proximity-based technology, and with it places like coffee shops eliminate the need to hand out passwords by letting users hover their device near the router. Keewifi features 802.11ac and dual-band transmissions, and offers speeds up to 867Mbps.

Troubleshooting is simplified by using what the makers call "The Zen Button" -- when users press it, the router resolves common problems that affect WiFi, and will automatically switch over to a less occupied channel if necessary. The app, meanwhile, allows the router's owner to approve and ban devices, limit how long they can be connected, and more.