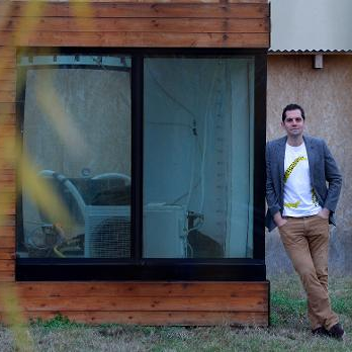 As UN climate negotiators gather in Geneva this week, one Japan-inspired Hungarian inventor believes he has found a revolutionary and inexpensive way to construct buildings that could slash humanity's energy needs.

And the magic ingredient for Matyas Gutai's invention is simple: water. It was launched after a long process of testing and patenting and a decade of research and development at a Japanese university.

"Imagine a building without insulation, yet with a perfect indoor thermal balance, thanks to the properties of water," the 34-year-old told AFP.

He showed off a small prototype in the backyard of a warehouse in his hometown of Kecskemet south of Budapest, developed with some 50,000 euros ($57,000) in EU funding and money from the Hungarian government.

The walls of Gutai's house are made of glass panels—with a gap in between like double glazing—filled with water.

This water, only a few cubic metres, is warmed by the sun—it can be piping hot during heat waves. It absorbs heat like a battery during hot spells and distributes it during cold snaps, making all cosy in winter or cool in summer, as needed.

An inbuilt monitoring system allows the user to set the desired indoor temperature, with the heat stored in the water transferred around as needed.

Excess heat in the water during hot periods is stored in a tank in the foundations to be sent back into the walls later when it gets colder.

The system reduces the need for external energy sources for heating, Gutai said, meaning that the building can be more independent from the local grid—so not responsible for any carbon emissions.

"In no other structure are you completely surrounded by connected volumes of water which, using its natural properties, and via a process called 'convective heat transfer', is able to move energy around to where it's needed," Gutai told AFP.

The walls can be made either entirely or partially of glass and are strong enough to support the building structurally, he said, and also provide perfect insulation despite being much thinner than those on a normal building.

He conceded that building a house in this way is moderately more expensive than the traditional way, it is cheaper than standard energy-efficient structures.

The idea is already attracting interest from architects and builders, Gutai said.

Surprisingly for a native of Hungary, a country famous for its thermal spas—and which gave the world the Rubik's Cube—Gutai did not have his 'eureka' moment in the baths of Budapest. Instead, it came in the "rotenburo" (open-air hot springs) of Japan in 2003 when he was studying sustainable architecture at the University of Tokyo.

"First I was very cold on the way to the pool, particularly on my feet. As I got into the pool I felt perfectly comfortable, no matter how cold the air was outside," he remembers.

It dawned on him how much more important surface temperature and heated mass are than air temperature.

"Air temperature like a cold breeze in summer, or the hot air of a fire in winter, is important but mass like in a pool is a completely different quality," he explained.

It was a time when many Japanese architects were beginning to explore ideas of low-energy consumption, particularly after the 2011 Fukushima nuclear disaster.

And the final jigsaw piece was another Japanese tradition: the martial art of Aikido and its concept of victory through non-resistance.

"You use the strength of your opponent's attack to your own advantage, you make your opponent fall down by flowing away from strength rather than blocking it," Gutai said.

"So I looked more and more at water, which doesn't resist but instead responds, in a smart way.

"Our goal should be to use less energy and materials, and take cities off-grid as much as possible. The water-house is one way to do that," he said.