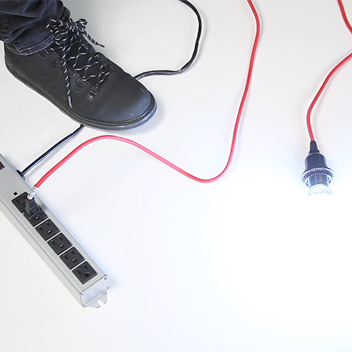 In the wireless-powered society of today, cables and wires are thrown out the window whenever possible. An overhaul of what a cord can do might save it from turning obsolete. MIT’s Media Lab, through Cord UI, is discovering other ways to utilize the trusty cable.

The first of the five prototypes is a standard study lamp that substitutes the dimmer knob with a knot on the cord. As the knot is tightened embedded sensors and a micro-controller dims the light. In another prototype, a standard office clip clamping on the Macbook charger wire was able to send the computer to sleep. The charger cable, infused with pressure-sensitive sensors, sends a pulse when pinched to put the computer to sleep.

The headphones use special external woven fibers that detect both touch and pressure. When the cord is pinched, it triggers the pause/resume functionality of the iPhone’s 3.5mm jack. By using resistors that detect ground and human touch, pinches from cord stress will not trigger a response.

A kink-sensitive cord also acts as the kill switch for the power strip. By kinking the cord with hands or feet, the power is automatically cutoff. The last of the five prototypes is a hard drive cable. A tug on the cord will send requests to the computer for safe device ejection eliminating the often forgotten ritual of right-clicking before pulling out the USB plug.

The cord has always been seen as a means of transporting data or power but with limited use for control. MIT Media Lab’s Cord UI projects opens up a new world of interface with water pipe metaphors for power and data transfer that can make everyday tasks easier.