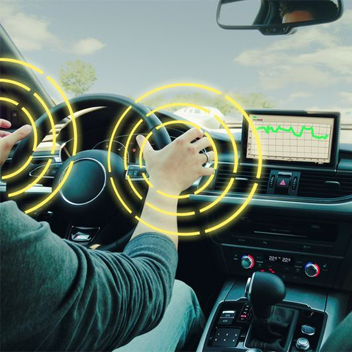 We've already seen systems that detect driver fatigue via steering wheel movements or by analyzing drivers' faces. German engineering firm Hoffman and Krippner, in cooperation with Guttersberg Consulting, has now developed what its designers believe is a better alternative – a fatigue-sensing steering wheel add-on that tracks the driver's grip.

The technology is based on the fact that when people drive and are reasonably alert, they're constantly applying pressure to the wheel and/or moving their hands along it. If someone should fall asleep, have a heart attack or otherwise lose consciousness, that pressure will lessen and their hands will move less.

The actual device consists of a thin strip of sensors developed by Guttersberg Consulting that is applied to the inside rim of a manufacturer's existing steering wheel, beneath the leather (or other) covering. That "Sensofoil" strip is made up of thin layers of foil, that have a weak electrical current running through them.

When pressure is applied and causes the layers to touch one another, it creates a short circuit between those layers, much in the same way that a resistive touchscreen works. A microprocessor keeps track of the intensity, frequency and location of those shorts, and uses it to establish a typical driving pattern for the user. When they deviate from it significantly, the car will then alert them to wake up and pull over.

Additionally, the system could be programmed to feature up to 10 "hot spots" on the wheel, which the driver could touch to activate features such as entertainment or communications controls.

According to the company, its resistive technology is superior to capacitive systems being developed by other groups in that it's less sensitive to factors such as dirt, sweat and temperature changes; it works even when the driver is wearing gloves; it detects pressure changes incrementally, as opposed to just all or nothing; and, it can register those changes more quickly.

It might be some time before you see it in your car, however. A rep tells us that commercialization is still "years away," and that it will then likely first appear in luxury vehicles before trickling down to lower-priced cars.