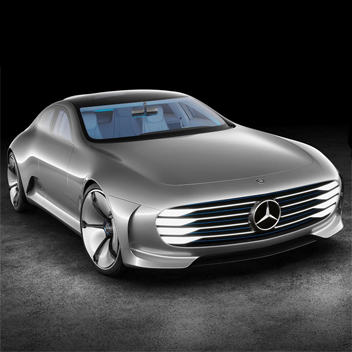 Mercedes has revealed the radical Concept IAA (Intelligent Aerodynamic Automobile) at the Frankfurt motor show. A sleek CLS-like saloon with a 279bhp plug-in petrol/electric drivetrain, the concept features active aerodynamics to improve the drag co-efficient from Cd 0.25 to Cd 0.19. To put that in perspective, the Mercedes CLA was the world’s most slippery production car when it launched in 2013, with a drag co-efficient of Cd 0.22.

At the front of Concept IAA, flaps behind the grille close to improve airflow when none is needed to feed the radiator – already seen on other Mercedes production cars – while the lower carbonfibre front splitter retracts; at low speeds the splitter plays a part in pedestrian protection, but as speeds rise, so the splitter retracts to help under-car airflow. Gills at the side of the front bumper also adjust, moving 25mm out and 20mm further back to reduce turbulence around the wheel arches.

The 22-inch wheels (with comparatively narrow 235-section Continentals) are a futuristic, colander-like design, and also feed in to the active-aero melting pot. Featuring a deep 55mm dish at lower speeds and a gap around the perimeter to channel cooling air into the brakes, centrifugal forces gradually cause the dish to become entirely flat by 50mph, again improving aerodynamics.

But the most interesting part of Concept IAA is its rear end. Looking like a longtail-Le-Mans-racer-cum-arse-of-armadillo, the bodywork electro-mechanically extends by 390mm, reducing the rear surface area of the car – it makes the biggest contribution to the IAA’s on-the-go aero improvement. The sprouting bodywork is made from carbonfibre to ensure both maximum strength and minimum disruption to the IAA’s weight distribution. While the aerodynamics only reduce CO2 by 3g/km on the EU cycle, Mercedes engineers claim a 20g/km reduction at 90mph. Mercedes quotes an all-electric range of 40 miles, and 28g/km on the combined cycle.