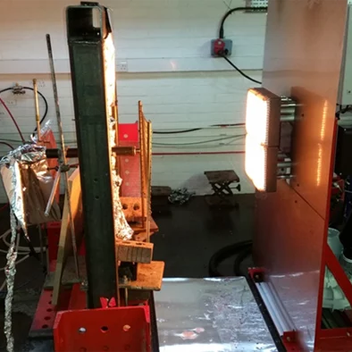 By cutting construction time, requiring less equipment and making less noise, self-compacting concrete has a number of benefits over conventional vibrated concrete. But where it falls down is resistance to fire which results in flaking and splitting. Scientists have now found a way to overcome this, by doping the concrete mix with a special polymer that they say better equips it to withstand high temperatures and in turn, maintain the integrity of a structure.

While it doesn't burn in the conventional sense, concrete chips and flakes when exposed to fire, for the same reasons that firewood crackles. Water trapped inside the material vaporizes when subjected to high temperatures, which builds pressure within and causes the material to degrade with splits, chips and flakes. This matters little when all you need is to keep warm, but is cause for concern when we're talking about ceilings, walls and load-bearing pillars.

This problem can be avoided with normal vibrated concrete by adding polypropylene (PP) fiber to the mix. When exposed to high temperatures, these fibers melt away and leave a network of canals for the water vapor to escape, a neat little trick that prevents pressure from building inside. But adding PP fibers to self-compacting concrete impacts its ability to self-compact, so the amount of PP fibers must therefore be kept low, leaving a wonder concrete that is both self-compacting and fire-resistant so far out of reach.

Now scientists at the Swiss Federal Laboratories for Materials Science and Technology (EMPA) say they have found a solution. They made a series of thin concrete walls, all of which were mixed with polypropylene fiber but only some of which contained a synthetic material called super absorbing polymer (SAP), which is able to absorb many times its own weight in water.

The idea is to soak in water the SAP beforehand and cause it to swell up to several times its dry volume. Then as the concrete sets, the water is drawn out of the SAP through the porous cement matrix which then causes the SAP to shrink, leaving behind hollow spaces inside. These spaces then link up with the other hollow spaces inside the concrete left behind by the few melted PP fibers that were in the mix, again creating a network of canals that enable it to withstand intense heat.