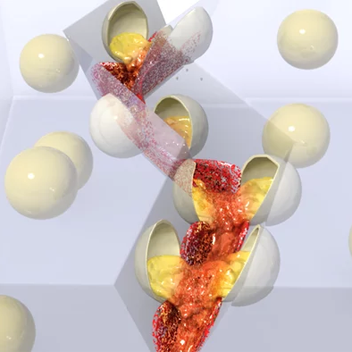 Whether they're on airplanes, bridges or pipelines, even the tiniest of cracks can fast lead to catastrophic failures. That's why it's important to identify them as early as possible, before they get out of hand. With that in mind, scientists at the University of Illinois have created a new polymer coating that can be applied to a wide variety of structural materials. When those materials crack – even a little – the polymer changes color to let inspectors know that something's up.

As long as no damage occurs, those capsules remain intact. However, should a crack form (as small as 10 micrometers in width), the capsules in that area burst and release the dye. That dye chemically reacts with the epoxy, changing from yellow to bright red in color. The larger the crack, the greater the amount of dye reacts, and the more pronounced the color-change.

According to the researchers, the polymer has been successfully tested on materials including metal, glass and other polymers. It's also reasonably inexpensive, as it only needs to be composed of five percent microcapsules in order to work effectively.