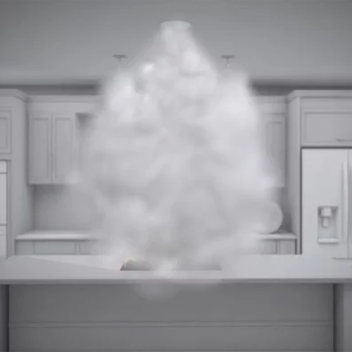 A fire-suppression system that automatically detects a fire and then releases a non-toxic suppressant could help alleviate the thousands of cooking fires identified as the leading cause of home fires in the US and elsewhere. Unlike other automatic systems that rely on water, toxic suppressants or aerosols, the Haven system uses a dry chemical suppressant that is automatically triggered when it detects heat of 135º F (57º C) rather than smoke.

Each Haven unit consists of a single cylinder of suppressant attached to a sensor and a cover that looks like a standard in-ceiling smoke detector. Ceiling installation is said to take about five minutes, and the contents of the cylinder are good for up to 10 years. The only element that may need to be replaced before then is the standard 9V battery that powers the LED pressure indicator.

The company recommends installing the Haven within four feet ( 1.2 meters) of a potential fire source like a kitchen stove or oven. Tests have reportedly proven the Haven device can suppress or extinguish a fire in a room as large as 16 by 16 feet (4.9 by 4.9 meters).

Unlike automatic sprinkler systems that can cause water damage and leave an expensive clean-up situation, the contents of the Haven can be cleaned up with a regular vacuum cleaner. If the contents are released or the pressure lessens over time, as indicated when the LED light flashes, the unit can be recharged for less than the cost of a new one.