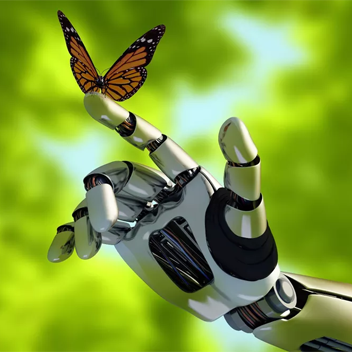 Flexible, wearable sensors open the door for everything from more effective health monitoring to robots with a sense of touch that can respond to stimuli like humans. While numerous electronic skin technologies have been developed, getting costs down has remained a problem. A Chinese team of scientists has now developed a new transparent smart skin that they claim is not only cheaper to produce, but is also able to harvest mechanical energy to power itself from movement.

The researchers say that previous attempts to increase the sensitivity of electronic skins has generally meant a corresponding increase in the number of electrodes, thereby also making them more expensive. Some smart skins also need an external power source, which means more wires. Other technologies, such as the Paper Skin, have impressive capabilities, but their lack of transparency limits their potential for use in wearables.

Made of ultra-thin plastic films, the researchers' new skin achieves a touch resolution of 1.9 mm using just four silver-nanowire electrodes and an analog localizing technique. The system also includes a component which creates electric charge through friction in a similar fashion to the University of Wisconsin-Madison's nanogenerator car.

Energy is created through the triboelectric effect, harnessing the electrical charge created when certain materials come into contact with each other, like when you run a comb through your hair. The principle has been used to generate electricity in everything from clothing to touchscreens, and means the smart skin could harvest energy from the movement of prosthetic fingers without the need for external batteries.

The new smart skin's creators say it's sensitive enough to pinpoint the location and force of an interaction, and can even detect a bee flying toward or away from the surface. It is also electrically stable, with the smart skin subjected to over 30,000 cycles and maintaining the same level of output.

Ultimately, the team suggests their technology could move us a step closer to offering robots and prosthetics with a sense of touch at a reasonable price.

The team's study appears in the journal ACS Nano.