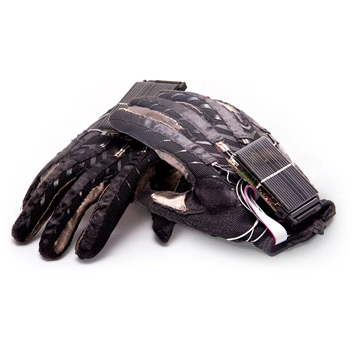 Sign language has helped the hearing-impaired communicate for many centuries, way before it was formalised and officially recognised, but this long-standing language of gestures has now been given a 21st-century technological upgrade. Saudi designer and media artist Hadeel Ayoub has invented a smart glove that recognises hand movements and converts them into the relevant text.

Much like Google Translate can give anyone a basic grasp of a foreign language in an instant, this glove is designed to help sign language users make themselves understood by those who can't usually interpret it.

Five flex sensors sit on the fingers, monitoring how they're being manipulated, while an accelerometer integrated into the fabric of the glove figures out how the hand is being held and the direction in which it's pointing. Through three successive prototypes, the glove has been made thinner, lighter, and faster, and the latest version includes a text-to-speech chip to vocalise the words as they're signed.

Ayoub has also created a computer application for displaying the signed words and phrases on a small screen. Eventually, she wants to create a mobile app so the same effect can be seen on a smartphone or tablet, and once Wi-Fi is incorporated - scheduled for the next prototype - the glove could also be used to send texts and emails. The addition of a motion controller in the fourth version of the glove should add to its accuracy too.

"I had one mission when I started this project and it was to facilitate communication between all kinds of disabilities, eliminating barriers between people who have a visual, hearing, or speech impairment," explains Ayoub in a press release. "The prototypes each have a new additional feature, an LED light, and a speaker for example, that took me one step closer to my goal. Once I've incorporated Wi-Fi and translation features into it the glove will be useful for all - no exclusions as to who the user can reach, wherever, whoever, from any country at any time."

While other researchers have worked on similar projects in the past, Ayoub says her invention is the lightest and most practical yet. She also has plans for a version for kids and wants to incorporate multilingual capabilities into the device so that speakers of sign language are able to communicate in whatever tongue they choose.

The fourth prototype is expected to cost in the region of £255 (US$386) and Ayoub has already been approached by several companies interested in manufacturing it. She's hoping that the costs are eventually picked up by schools and companies buying the gloves for their students and staff. You can keep up to date with the project at Hadeel Ayoub's own blog.