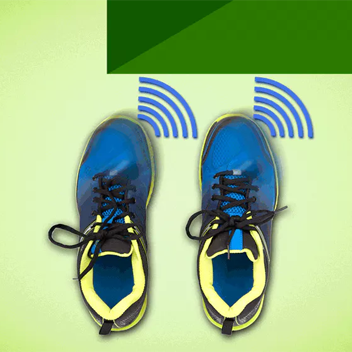 Research has shown that the low gravity on the Moon can actually make it harder to stay upright as it is harder for astronauts to distinguish up from down. The pressure suits that don't let astronaut's see their feet and their bulky boots don't help proceedings and puts them at constant risk of tripping for a potentially fatal fall. To keep future explorers on their feet, MIT researchers are developing a new space boot that uses built-in sensors and tiny "haptic" motors to help guide the wearer around obstacles by means of vibrations.

Popular science fiction makes spacesuits seem no more complicated than a wetsuit and scuba gear, but they're actually extremely complex bits of technology that combine space engineering with tailoring. They are also bulky, hard to move about in with any grace and, since the astronaut is essentially trying to navigate a human-shaped balloon with a fishbowl stuck on top, something as simple as stepping over a curb can be a major hazard.

Still in its preliminary design phase, the space boot being developed by researchers at MIT's Department of Aeronautics and Astronautics and the Charles Stark Draper Laboratory is essentially a shoe with proximity detectors and a haptic feedback system to tell the wearer where and how close an obstacle is. Other, more Earthbound systems have had similar functions, such as inserts working with an app for navigation and toe-ticklers linked to GPS, However, the information given is often very simple, such as buzzing the left or right foot to indicate walking directions.

The MIT team's goal for is to come up with a more efficient and reliable system for the space boot so it can convey spatial information. To do this, they are investigating what sort of stimuli best communicates information, where to place the haptic motors, and what are the best cues to send to the wearer.

The original concept was to use a series of haptic motors positioned around the foot. The initial design had six haptic motors surrounding each foot with one motor at the heel, big toe, and instep, and three motors along the outer edge of the foot. The vibrations would buzz as sensors picked up an obstacle in proximity of the foot and warn the wearer of its direction and distance.

Based on proximity, the vibrations would vary smoothly from minimum to maximum without a break, but in initial tests where subjects had to identify the intended stimuli, the team found that if the subjects were distracted,when taking a simple computer test, for example, they couldn't identify the gradual increases in vibration, nor could they discern the direction of the stimulus. In addition, some parts of the foot proved very insensitive to stimulation.

Based on these tests, the team produced a simpler design using motors at the toe, heel, and the front of the outside of the foot. In addition, the vibrations weren't varied smoothly, but in jumps from low to high intensity to produce an unambiguous warning that a collision with some obstacle is imminent with the high-intensity vibration coming in pulses to get the point across.

According to MIT, the team is planning further trials using a more advanced prototype of the boot. The first trials will deal with the problems of stepping over obstacles of different heights and learning how the haptic signals can be coordinated with visual cues. Once made practical, the team believes that the space boot could be useful not only for astronauts, but for rescue workers, the elderly, and the visually impaired back on Earth.