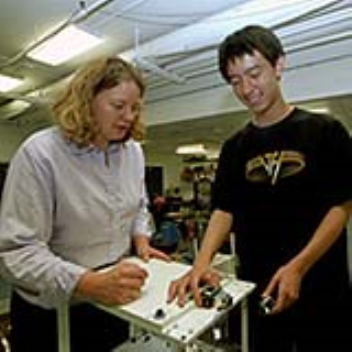 An earthquake engineer at Washington University in St. Louis has successfully performed the first test of wireless sensors in the simulated structural control of a model laboratory building. Combining the wireless sensors with special controls called magnetorheological dampers limit damage from a simulated earthquake load.

The wireless sensors, about a square inch in size, are attached to the sides of buildings to monitor the force of sway when shaking, similar to an earthquake, occurs. The sensors are then transmitted to a computer program that translates the random units read by the sensors into units useful for the engineers and computer programmers.The computer sends a message to magnetorheological dampers, or MR dampers, that are within the building's structure to dampen the effect of the swaying on the structure.

MR dampers act like shock absorbers for a building. Filled with a fluid that includes suspended iron particles, the MR dampers lessen the shaking by becoming solid when an electrical current (turned on by the computer, which has been alerted to the swaying by the sensors) is run through the MR dampers, aligning all of the iron particles.