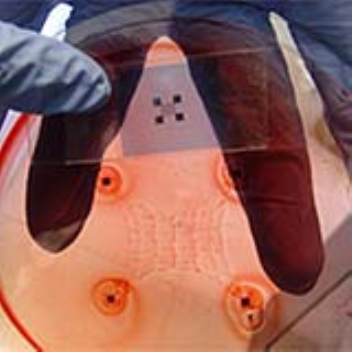 A new design for silicon-based chips makes it possible tomechanically stretch them out to cover large areas. These expandedchips, which could be thousands of times the size of the original,could be used to make cheaper solar panels, sensor networks, andflat-screen TVs.

The chips, built by researchers at Stanford University, consist offree-floating islands of silicon surrounded by coils of silicon wire.Each island can be processed to include transistors, sensors, ormaterials for tiny solar cells. When the corners of the chip are pulledon, the coils around the silicon islands unwind. As they do, theislands, which start out nearly touching each other, spread apart. Theend result is a netlike array of silicon devices.